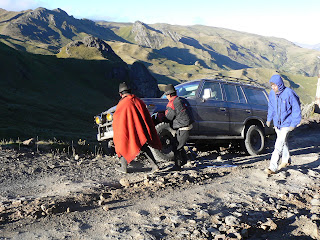 Labels: you can understand why the piggy doesn´t want to go to market

trekking and the market

Labels: put one twice but don´t know how to delete it 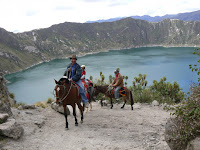 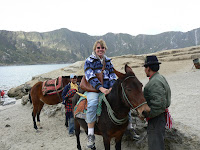 Labels: Our trip as far as Latacunga 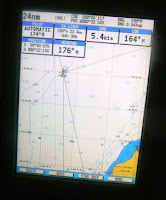 Labels: North, South and us in the middle

Labels: trying to pursuade Ken that he would like to stay 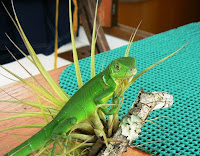 Part 2 to Ecuador
I am adding to this off the coast of Columbia. We have a 500mile trip which involves head winds of about 15 knots and bumpy seas. The seas whenever you are going into them are very uncomfortable. We are grateful for our comfortable catamaran as our back bunk is very stable and when we get to sleep you are unaware of the bouncing around in the rest of the boat. This coast also has the Humbolt Current which comes up from Peru and is about 1 to 1 ½ knots against us too. This makes for a 5 day passage which would be a lot shorter and more comfortable if we were going the other way. The great thing is we are sailing!!! After months of motoring and at the best motor sailing we only need to start our engines to boost the batteries every now and then. We left three days ago and our fuel tanks are still showing full. Guess we did not need to go to the hassle of getting fuel but as we are so used to motoring we do not dare take on such a long passage without topping up everything. It is so much nicer and the boat handles the seas much better under sail. We are looking out for drug runners—were flown over by a navy or coastguard plane yesterday so guess they are too!!! Have only seen three tankers after leaving the Panama area where they were lined up to go through the canal.
We have hit great winds and the current has eased so we are now doing 8 knots and the opposing current is only ½ knot so we will be a day earlier—yeh!! Actually not as good as it could be as we will arrive at the entrance to the estuary sometime tomorrow—our 4th day but you have to go over a sand bar at high tide and are taken in by a pilot but high tide is at 7am and we won’t get there by then. You anchor in an open bay but apparently the anchorage is not too rolly and we will have to wait till 8am the following morning to go in. Oh well better than our present rolly passage!!!
A highlight earlier today off the cost of Columbia was when we were hailed by a panga—70 miles to the nearest land—the two fishermen held up a lovely dorado (mahi mahi) and asked us if we wanted it. They wanted $2 which we transferred in our fish net and got the fish back in it. We have had ceviche for lunch and tonight will be blackened mahi mahi what a treat. These guys lead a hard life—an open panga with no cover and presumably would only get $1 for the fish when they get home.
We finally crossed the equator at 6 30 am today the 6th June. We were 20 miles off the coast of Ecuador—somehow 6 30am when we have been doing night watches for the last 4 nights does not make one wish to have a big champagne celebration so we had a small glass of wine and a cup of tea!!!!
We will be here for at least 6 months maybe 8 as we explore Ecuador and Peru and go to Canada in September and New Zealand in October. It will seem strange not to be sailing off somewhere and to have no real agenda. We did book to hike the Inca Trail at Machu Pichu on September the 2nd for 4 days—this is such a heavily booked trail it was the earliest we could get— it will be a thrill.
We feel as though we have reached a milestone on our journey as we are now in the southern hemisphere—at what moment did the water run down the pipes the other way??
One last note for this blog—we did manage to get in through the sometimes 5foot deep sandbar to come in a 6pm. There is a lower high tide and seeing as our catamaran only has a 4 foot draft they decided to bring us in so a great night at anchor!!!
Baria Caraquez, where we are appears to be very pretty—more like Mexican ports than we have had since. The weather is much cooler than Costa Rica and Panama and it is the dry season so will be very pleasant.
We look forward to having a lot of time to explore these countries and will keep in touch with our new adventures
Posted by Ken and Wendy at 12:05 PM 1 comment: